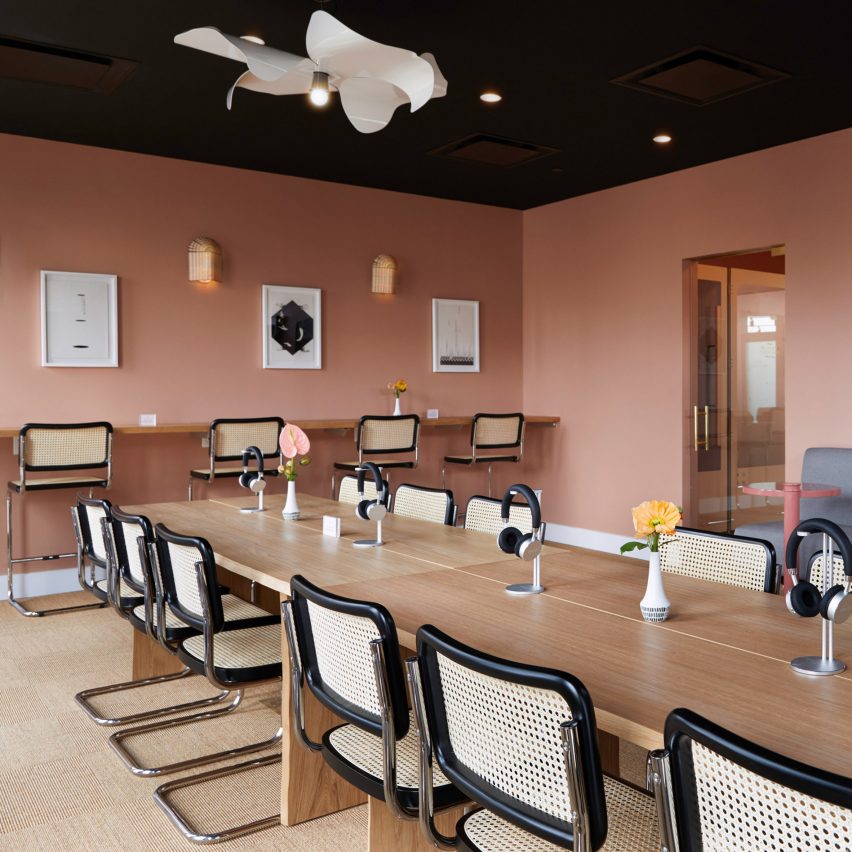 Women-focused co-working company The Wing has used a combination of neutral tones and pops of black for its Williamsburg space, which contrasts the colourful aesthetic of its other outposts.

The Wing Williamsburg occupies the upper two floors of a newly built three-storey brick building in Brooklyn, New York. The co-working spaces are topped with a spacious rooftop patio that will be decorated when the weather warms. 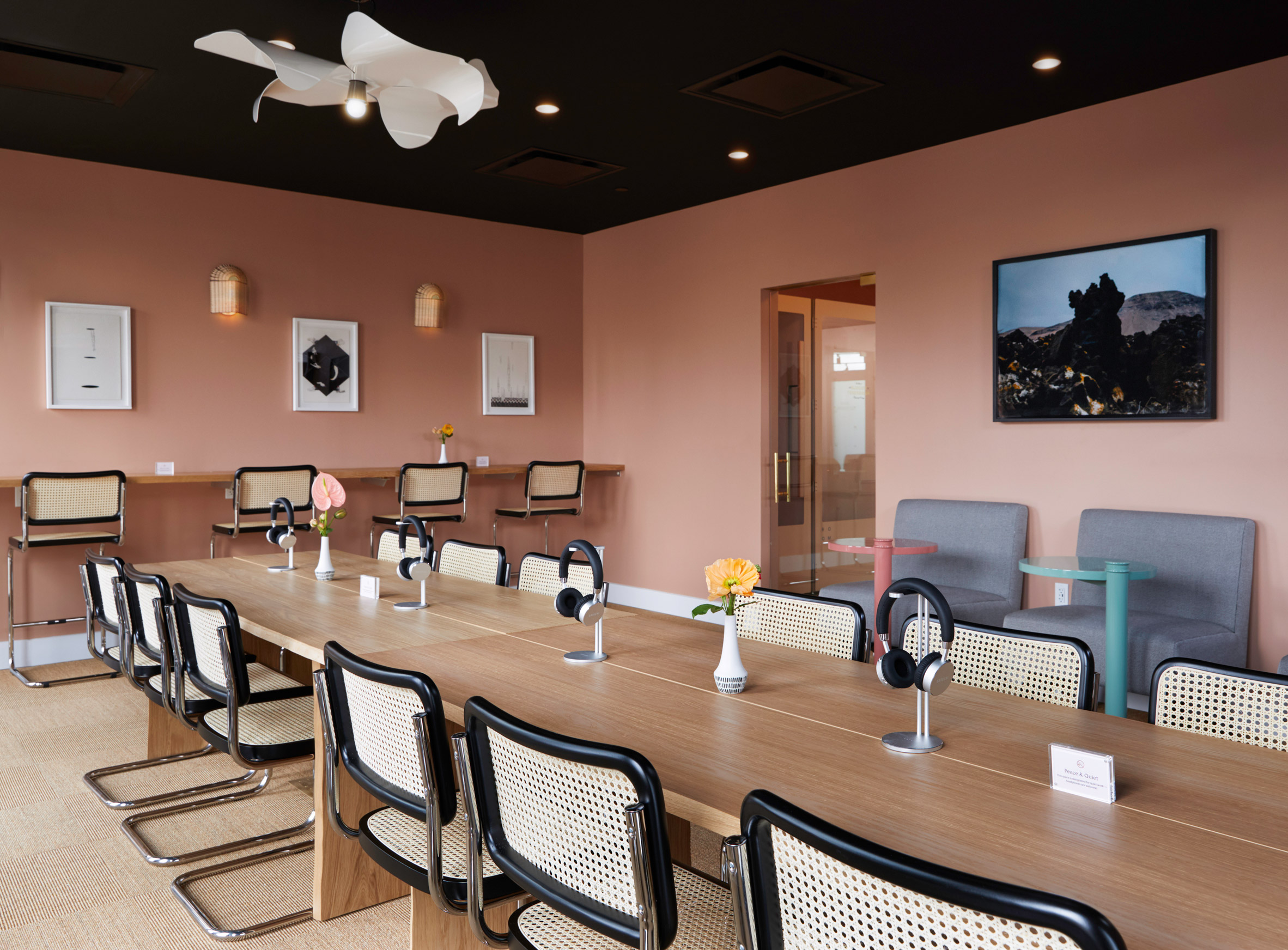 The interiors were created in-house by The Wing’s lead interior designer Laetitia Gorra, and make extensive use of black and neutrals for the first time. 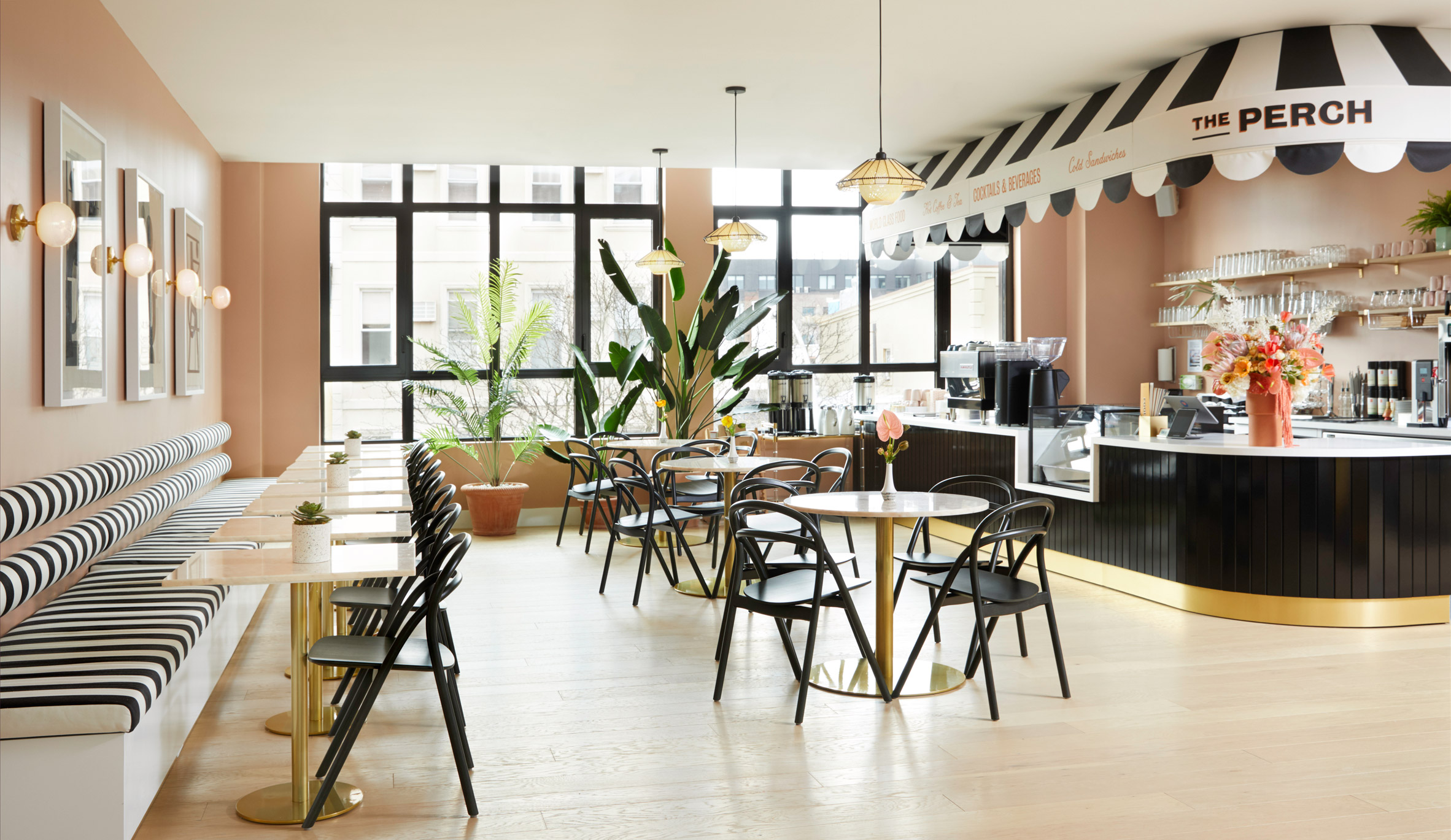 “This is the first case we introduced a lot of black,” Gorra told Dezeen. “The colours in this space are a bit different than the colour tones we’ve used before.”

The Wing has many locations, including in Manhattan’s Soho area and London near Oxford Circus tube station, and bright colours often feature prominently. 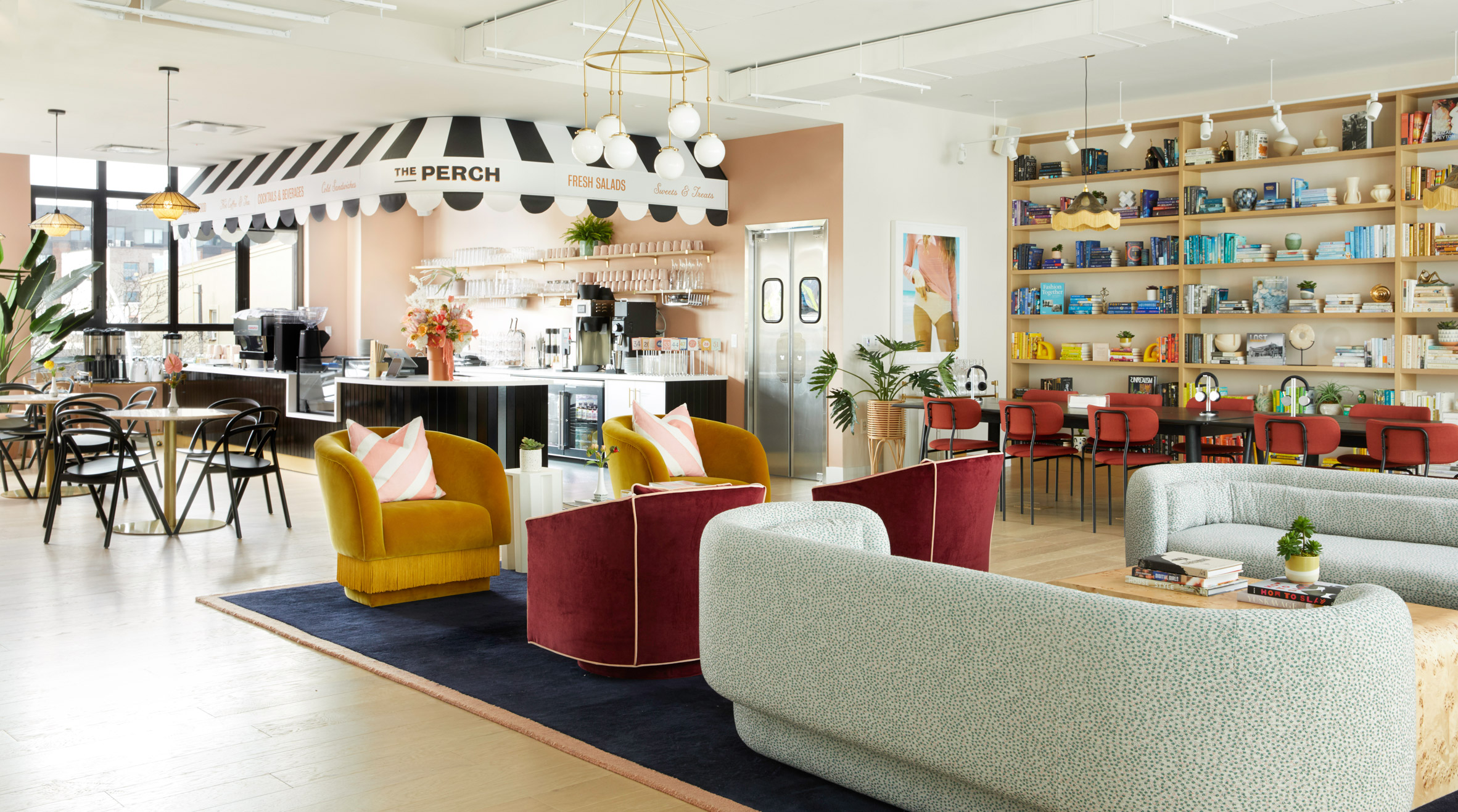 Black is used in the Williamsburg outpost on the ceiling in a room dedicated to working quietly, which is a new offering for The Wing, as well as in wallpaper, furniture and bathroom tiles.

A striped black-and-white pattern features in The Perch cafe area, which all of The Wing locations have for members to buy food and drinks while working. 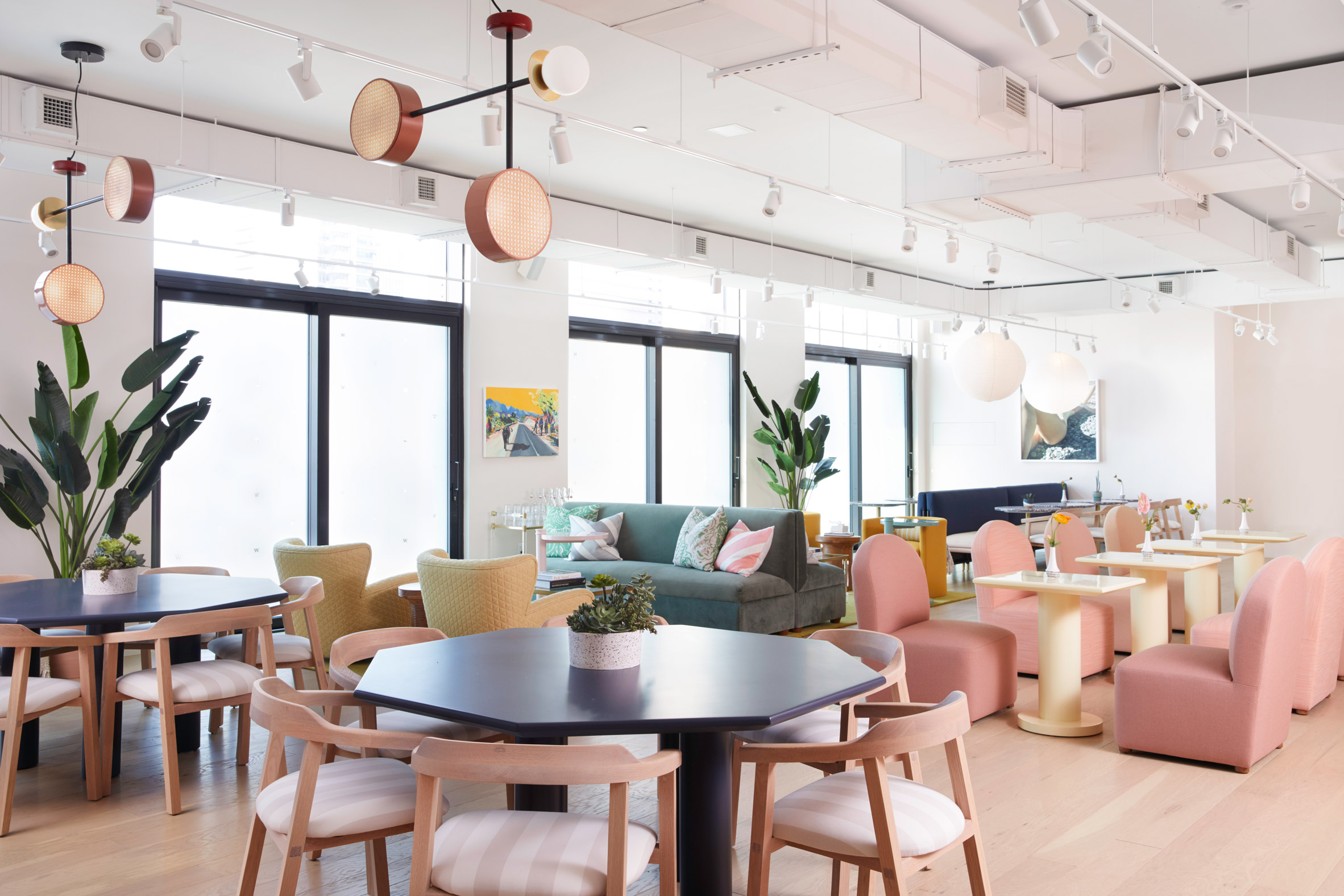 The interiors also have more neutral details than previously used, Gorra claims, from Sisal flooring made from woven agave plant leaves to sage green walls in a conference room.

“Combining the beige with the black and white felt very elevated and chic, and different from anything we’ve done in the past,” she said. 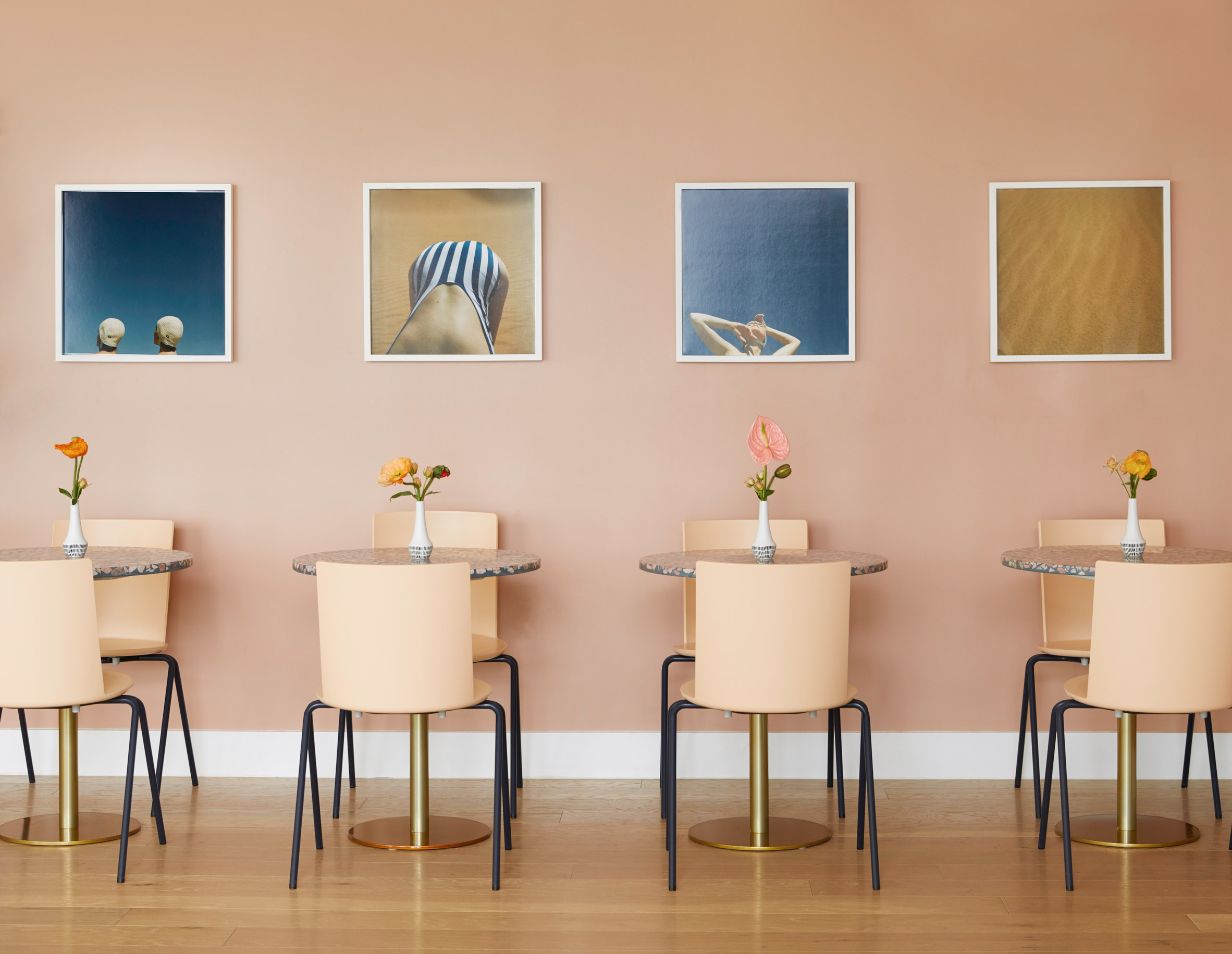 Gorra likens the dusty pink colour on the walls as a “neutral beige”, which is a nutmeg colour by Benjamin Moore paint.

“I wanted to use more neutral tones,” said Gorra. “We never really used beige before, or done a ton of black and white.”

The flesh hue is enhanced on furniture in more pink and red shades, and on the entry’s hexagon tile floors in a floral design.

Almost all of the furniture is custom made by The Wing, from these tables to swivel chairs and sofas, as is standard for all of its locations.

Upon entering is an open-plan space decorated like a living room with sofas, upholstered chairs and two long blacks tables. A bookcase is filled with books sorted by colour, chosen by New York’s local bookstore ​The Strand,​ with many by women and about life in Brooklyn. 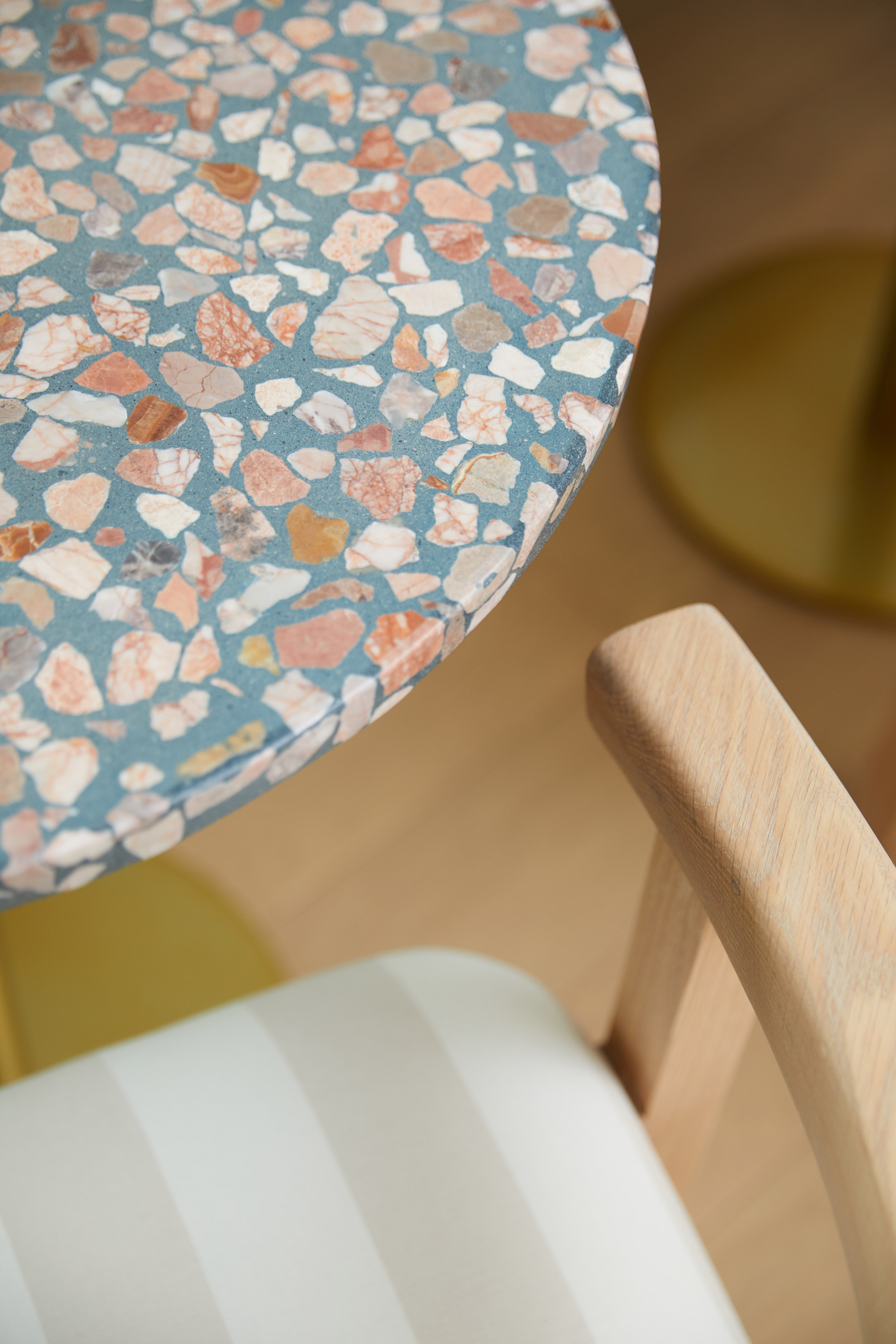 On the upper floor there are more tables and work areas, as well as the quiet room, conference room, two phone booths, and a row of ROOM pods. Terrazzo tables have navy tops with apricot marble chips, by Concrete Collaborative.

The Wing is distinct from other co-working spaces because it caters to women, and mothers in particular. 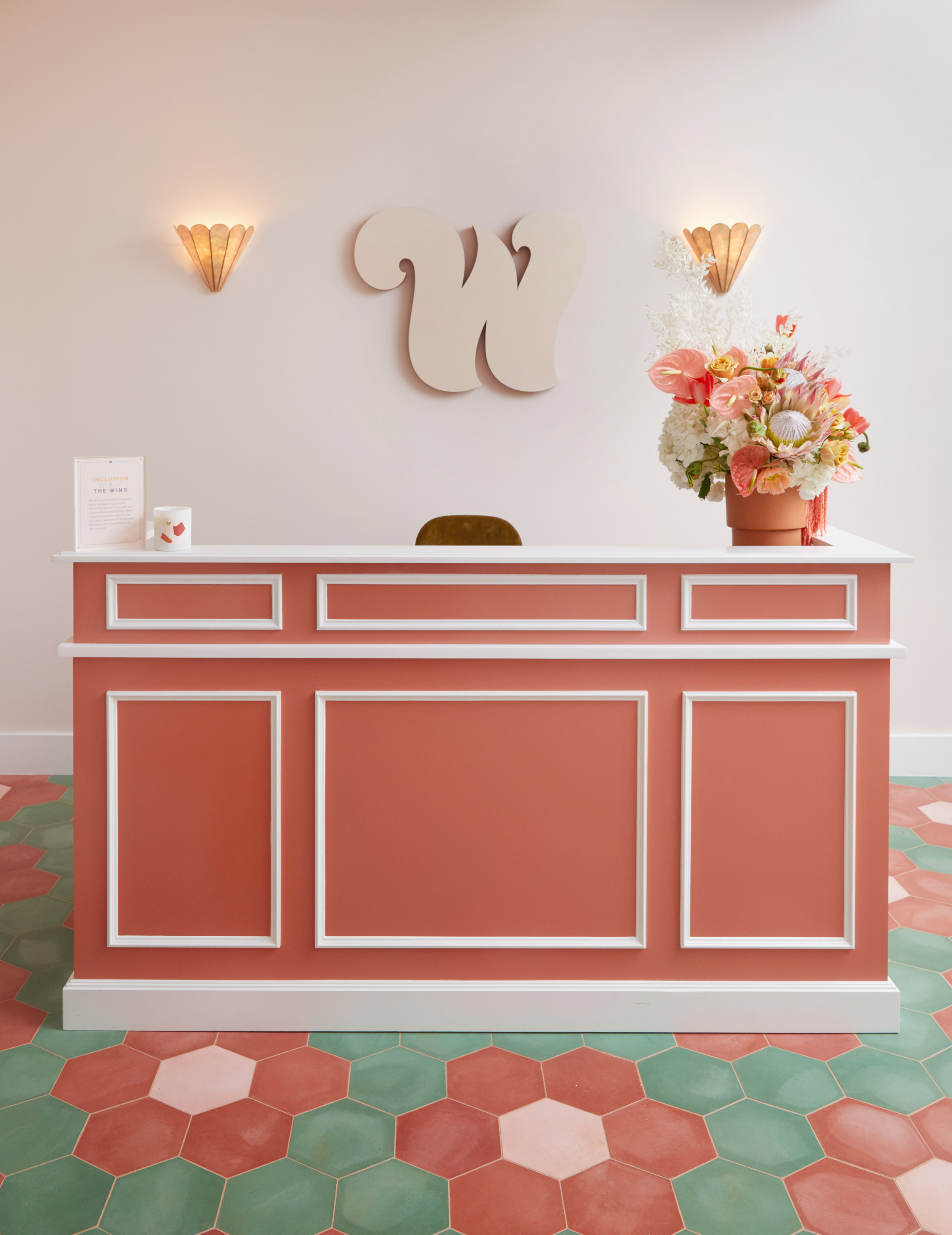 A lactation room in the Williamsburg brand has yellow floral wallpaper by Maison C, and is outfitted with Medela breast pumps, a changing station and toiletries.

To the left of reception is a children’s playroom – The Little Wing – where moms can drop off kids to be supervised and play while they work. Their is a similar playspace in The Wing’s Soho location. 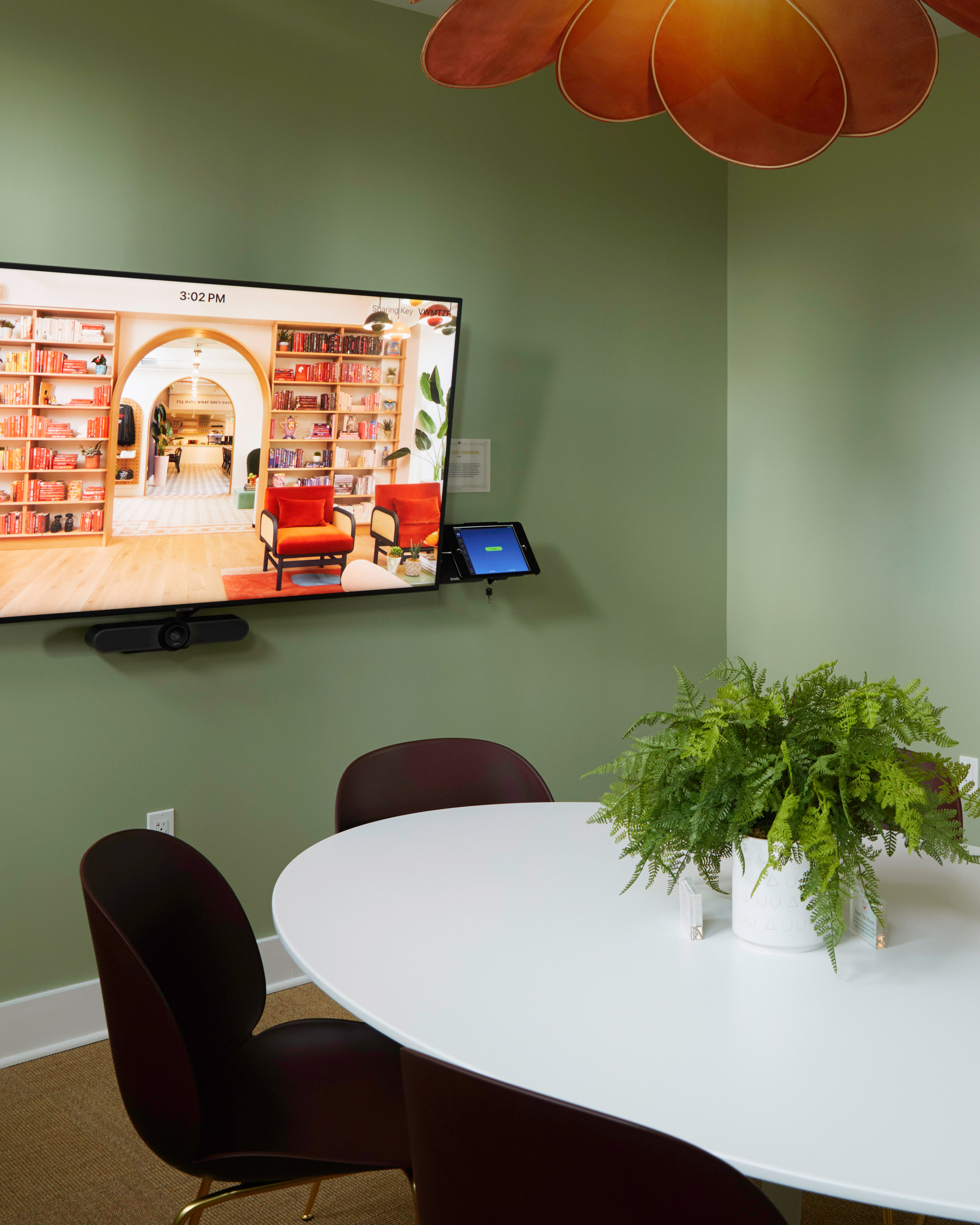 Also included is a shower with towels and robes, and a room decked out with makeup, hairdryers, and products from Chanel and Glossier.

The Wing was founded in 2016 by Audrey Gelman and Lauren Kassan, and the idea came from Gelman’s time spent travelling between Washington DC and New York for work and having to freshen up at random coffee shops in between meetings.

Photography is by Tory Williams courtesy of The Wing.

The post The Wing Williamsburg is a black and beige co-working space appeared first on Dezeen.

The perfect escape! Enjoy a tour of this stunning holiday home in Wales