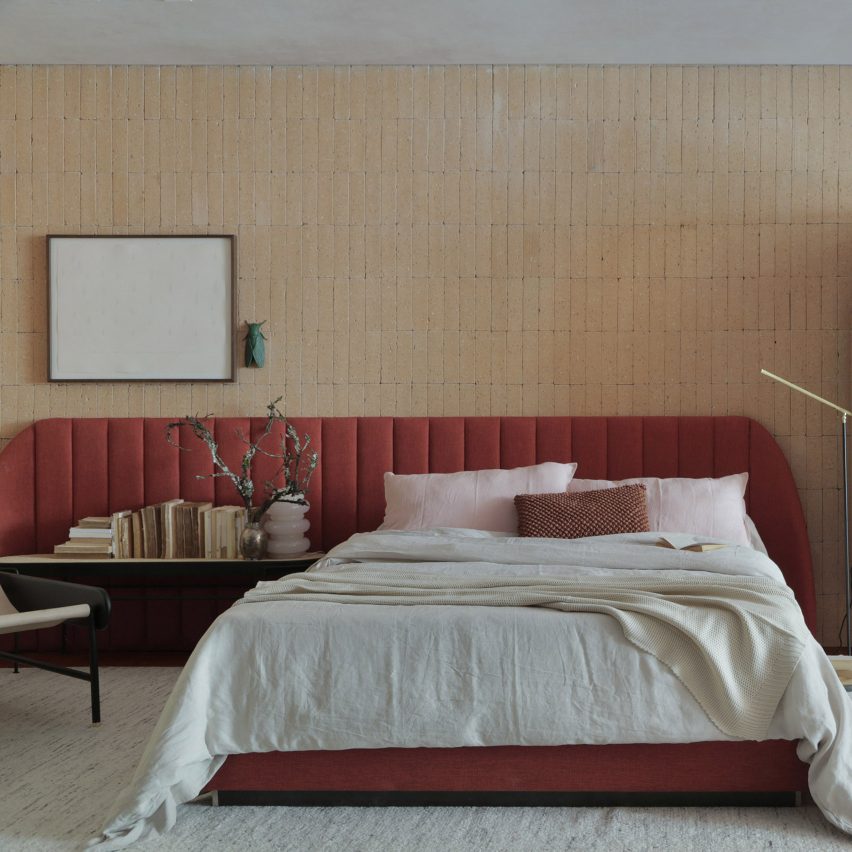 The project’s name, Hygge Studio, refers to the Scandinavian word used to describe a sense of cosiness and contentment. 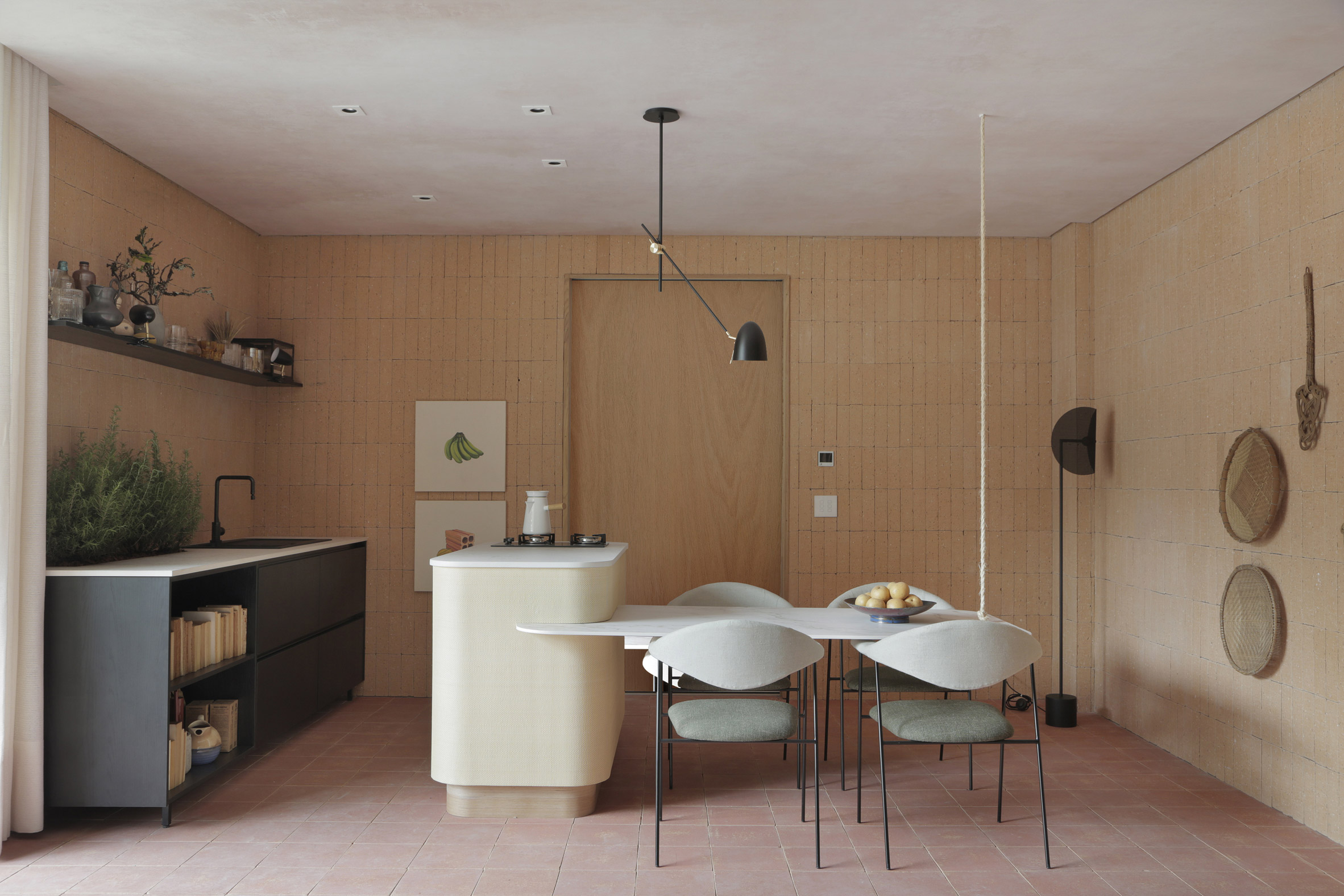 The apartment contains a living room, kitchen and a bedroom suite. The interior design was overseen by Melina Romano, who runs an eponymous studio in São Paulo.

Romano and her team said they blended colours, textures and materials to reach “the exact point between hot and cold, between modern and bucolic”. Throughout the 68-square-metre unit, finishes are meant to be easy to clean and maintain. 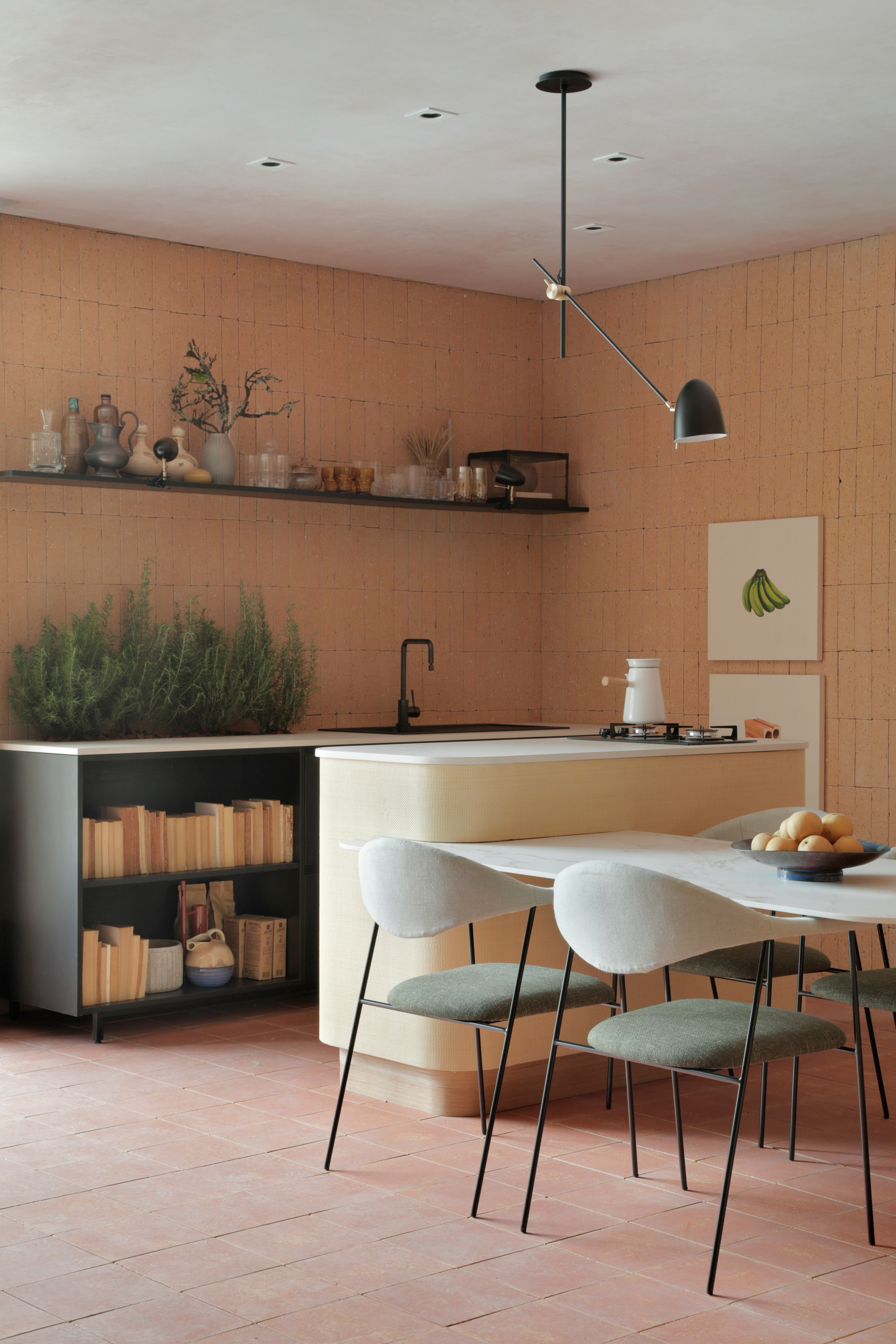 Terracotta flooring and tan brick walls lend a “rustic charm” to the space, the team added. Ceilings are sheathed with a textured wallpaper by the visual artists Adriana Pedrosa and Carlota Gasparian.

Rooms are dressed with comfy furniture in earthy tones, including vanilla, beige and sage green. 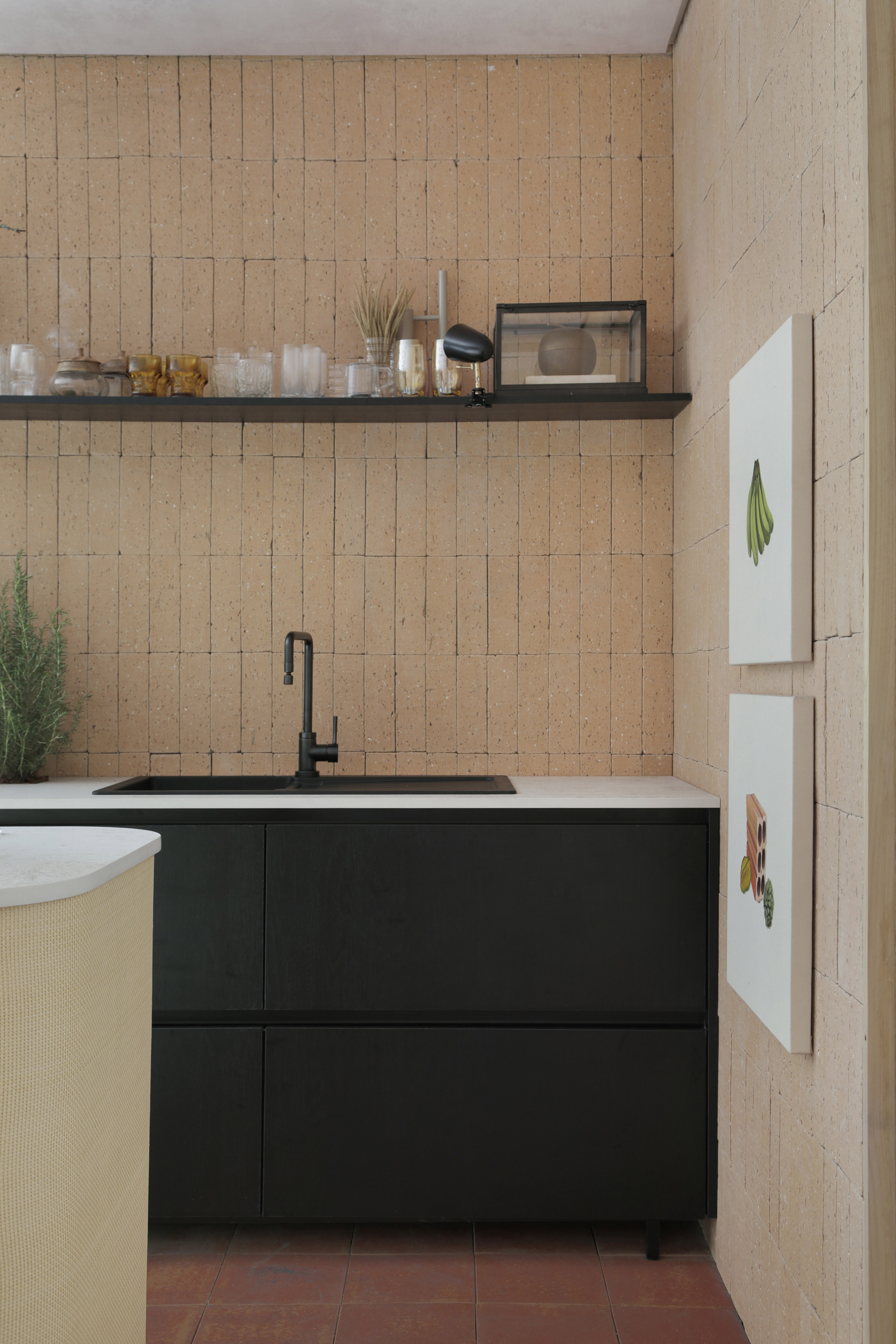 In the living room, the team placed a cream sofa, a sculptural wooden chair and a woven rug. Suspended from the ceiling is a black fireplace, which contrasts with the room’s soft colour scheme.

A focal point of the public area is a screen made of decorative blocks, called a cobogó. The screen was “strategically placed in the middle of the living room as a work of art that plays with light and shadow in space,” the team said.

The cooking area is fitted with black cabinetry and an ivory-coloured island. Countertops are made of Dekton, a composite material from the Spanish company Cosentino.

A white dining table joins with the island and receives further support from a rope affixed to the ceiling. The table is surrounded by contemporary chairs with green and white upholstery and skinny legs. 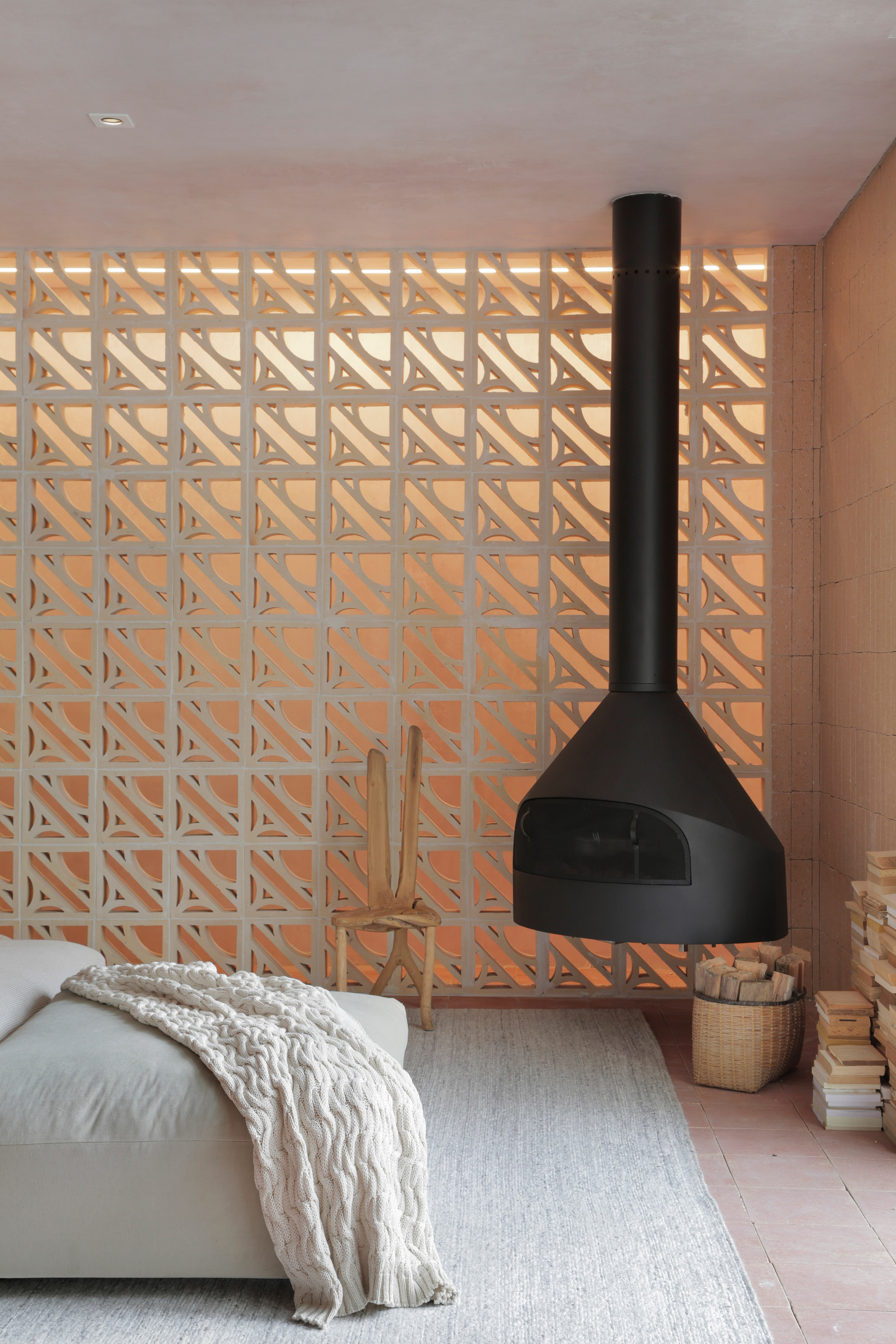 In addition to natural light, illumination is provided by a floor lamp with a moon-shaped shade and an overhead fixture that resembles a task lamp.

Other details include a staircase lined with tropical vegetation. Designed by florist Aline Matsumoto, the assemblage of plants includes moss-covered balls known as kokedamas. 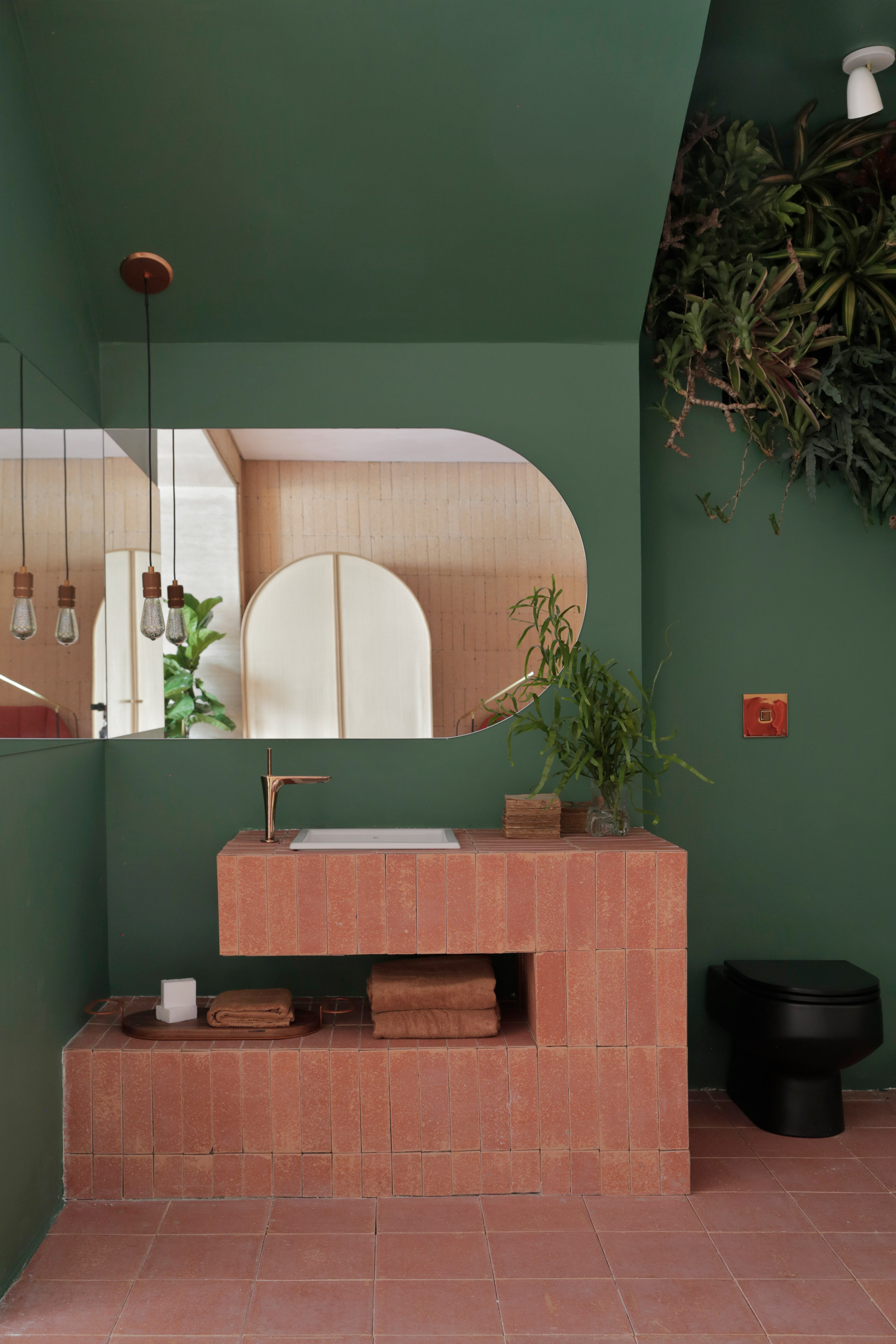 In the bedroom, the team placed a rust-coloured bed frame and headboard with a built-in nightstand. Additional furnishings are a slingback chair, an arched armoire, and a stick-like floor lamp.

Branches speckled with lichen, books without their covers, and wall art shaped like a winged insect are among the accents in the bedroom. 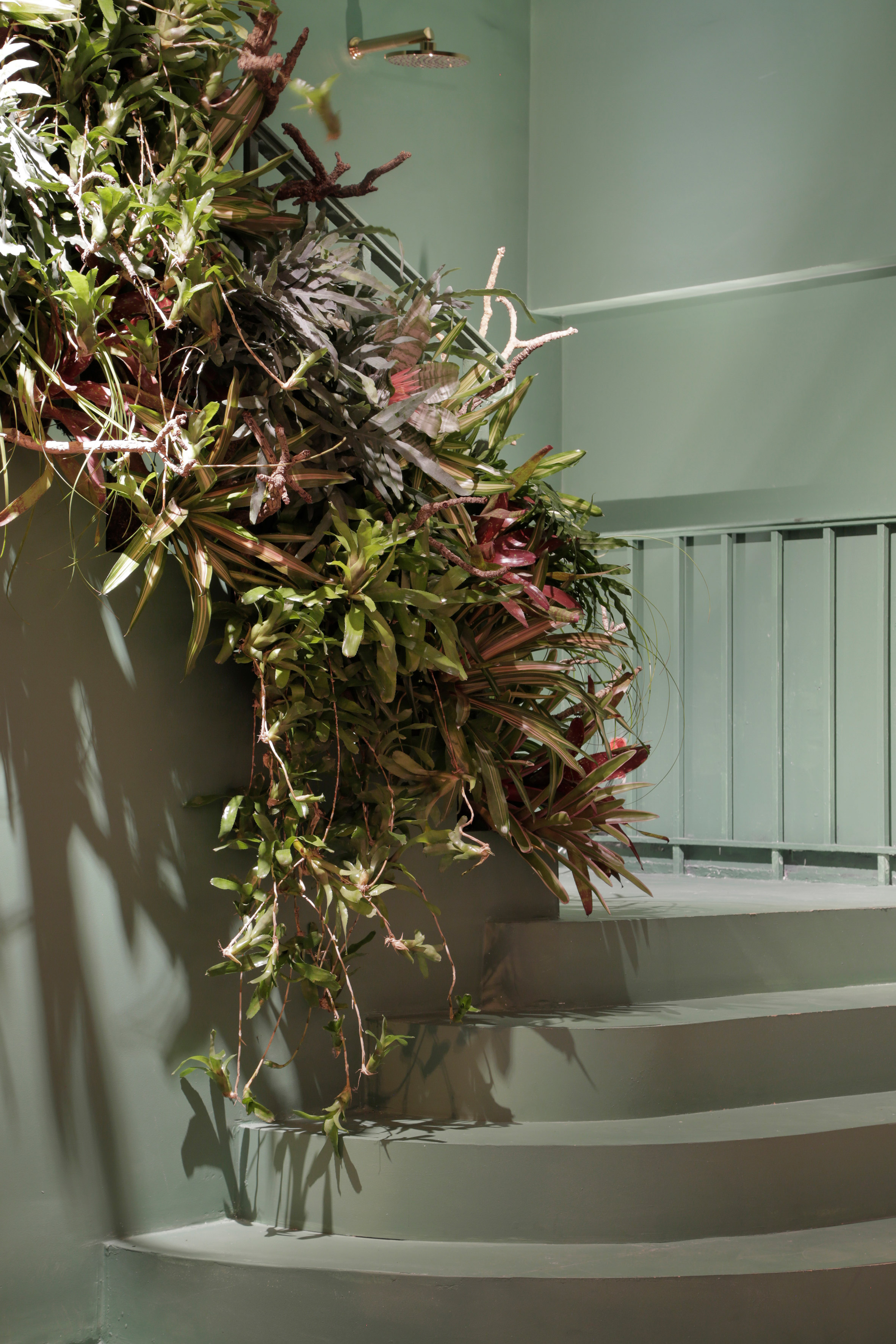 The bathroom, which is open to the sleeping area, has fern green walls, a rounded mirror and copper fixtures. Red brick was used to construct the vanity, which has an open slot for storing towels and toiletries.

Other apartments in São Paulo include a unit with basalt floors and a wooden ceiling by Studio MK27, a dwelling by NJ+ that features a kitchen concealed behind white latticework, and a renovated apartment by Rua 141 and Zalc Architecture that has an outdoor terrace converted into a glazed dining room.

Photography is by Denilson Machado of MCA Estúdio.

The perfect escape! Enjoy a tour of this stunning holiday home in Wales

The Wing Williamsburg is a black and beige co-working space